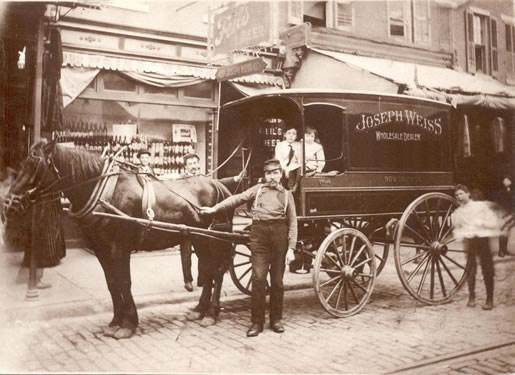 In 1938, Norman and Rae Weiss opened the doors of Weiss Bros. Paper in Hagerstown, MD. A distributor from the beginning, Weiss Bros. was actually a branch of a family-owned business in Norristown, PA. The distributor specialized in paper products, novelties, and leather and shoe accessories that were sold to small corner stores and shoemakers.

At the onset of World War II, Norman left the business to Rae and volunteered to serve our country in U.S. Army. It was during these years that the Weiss Bros. family expanded, hiring its first two salesmen. Norman returned from the war in 1946, and hired his nephew, Bernard Weiss, to call directly on new businesses.

Norman’s son, Richard Weiss, joined the family business in the early 1970’s. An educated man from American University, he worked from the bottom-up, learning all of the roles at Weiss Bros. Nine years later, Norman retired due to health issues and left the business in the capable hands of his nephew, Bernard, and son, Richard.

With Bernard and Richard at the wheel, Weiss Bros. moved to a larger facility, hired its first sales manager, Ralph Perri, and opened a party decorations store named “Paper Plus” in its warehouse. Weiss Bros. had moved from selling to shoemakers and corner stores to delivering to hospitals, schools, manufacturing plants, and office buildings. Rae continued an active role with the business overseeing Paper Plus.

The 1990’s brought new growth and big changes to Weiss Bros. In 1992, Bernard retired as president after 44 years in the business. The company moved its wholesale business to a larger facility off Oak Ridge Dr. while opening a stand-alone Paper Plus location in a retail shopping center off of Dual Hwy.

Rae Weiss continued to work at the party store until her death in 2001. She had spent over 60 years in the industry. Moreover, Paper Plus was sold to a new owner the same year.

In 2008, Richard’s son Michael joined the company as the third generation of the Weiss family to operate the business.